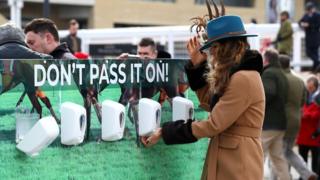 The number of coronavirus cases in the UK reached 373 on Tuesday, a rise of 54 since the previous day.

It comes as a man in his early 80s became the sixth person to die in the UK with the virus.

Meanwhile, airlines have cut thousands of flights including to and from Italy after the country was put on lockdown.

The British Medical Association said routine monitoring of long-term health conditions might have to stop enable GPs to “focus on the sickest patients”.

Earlier Dr Jenny Harries said she expected significant increases in the number of cases in the UK beginning in about 10 to 14 days time, at which point people with flu-like symptoms would be advised to self-isolate.

The vast majority of those diagnosed with coronavirus in Britain were “pretty well” but might “feel a bit rough for a few days”, she added.

Health Secretary Matt Hancock said “wherever clinically and practically possible” people should access GP appointments “through phones and digital means”, rather than going to surgeries in person.

The latest figures as of 9:00 GMT on Tuesday include 324 cases in England, 27 in Scotland, 16 in Northern Ireland and six in Wales.

Later on Tuesday, a further nine cases were confirmed in Wales bringing its total to 15.

There are 91 in London, with the next highest infected area being south-east, with 51 cases. Cases by local council area in England can be viewed here.

The latest person to die, on Monday evening, was a man with underlying health conditions who was being treated at Watford General Hospital.

He caught the virus in the UK and officials are trying to trace who he had been in contact with.

On Sunday, a 60-year-old man from Greater Manchester became the third person to die after contracting coronavirus. He had recently visited northern Italy.

The man was taken to North Manchester General Hospital and the rest of his family was told to self-isolate.

“Since we cannot go outside we regularly called the ward where he was ill,” the man’s son told BBC Bengali. “They did not allow me to speak to him directly.”

The son said they later received a phone call from the hospital saying his father – who had underlying conditions including arthritis, heart problems, and high cholesterol – had died.

Meanwhile, the UK Foreign Office has warned Britons against all but essential travel to Italy, which is experiencing the worst outbreak outside China, after it introduced strict travel restrictions.

Italians are being told to stay home, seek permission for essential travel, and give justification if they want to leave the country.

The Foreign Office is advising anyone arriving in the UK from Italy since Monday evening to self-isolate for 14 days.

The government says it has facilities to accommodate Italian visitors to the UK who need to self-isolate.

British Airways has cancelled all of its flights to and from Italy until 4 April, and has asked staff to take voluntary unpaid leave.

Easyjet, RyanAir and Jet2 are also cancelling their flights on Italian routes, though EasyJet will operate “rescue flights” to bring British travellers home in the coming days.

‘Enter shops one at a time’

“It’s the weirdest holiday I think I’ve ever been on,” said Hannah Butcher, from Newbury, Berkshire, who is in Rome with her husband for their first holiday alone since having a child.

“We arrived on Sunday. The advice then was as long as you’re not going into Italy’s red zone, you’re OK.

“We’re currently sitting in a restaurant and everyone here is in staggered rows because they have to sit one metre apart. It’s quite weird seeing families spread across multiple tables.”

She added that people are “only allowed to enter shops one at a time”.

“All the attractions are closed; there are queues out the door of supermarkets and the butchers. There are police driving round making sure the rules are enforced and a noticeable armed police presence, presumably to keep order.”

She said they were due to fly home with Ryanair on Wednesday morning and had not been informed of any flight updates.

Please include a contact number if you are willing to speak to a BBC journalist. You can also contact us in the following ways:

Coronavirus: Blind people shouted at in the street for not social distancing | UK News

Here is the Fastest Way To End Lockdowns

Govt allows imported drugs with residual shelf life of under 60%