You cannot consider yourself to have visited Shanghai without tasting these! 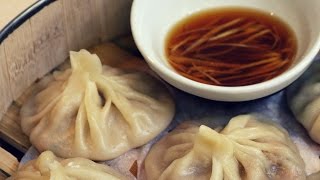 Soup Dumplings, or Xiaolong Bao in Chinese, are a type of steamed bun especially famous in Shanghai, better known among the local Shanghai people as Siaulon Moedeu. Soup Dumplings, as they are most often referred to most non Chinese, is a somewhat misinterpreted name as they cannot be confused with Chinese dumplings (jiaozi).  To many the main reason to call them Soup Dumplings is because they’re filled with hot soup (eat with care!!!)

According to wikipedia Xiaolongbao originated in Changzhou, by Wan Hua Tea House, in the years of Daoguang Emperor (1820 to 1850).

Shanghai-style xiaolongbao originated in Nanxiang, a suburb of Shanghai in Jiading District. The inventor of xiaolongbao sold them in his first store in Nanxiang next to the town’s notable park, Guyi Garden. From there the xiaolongbao expanded into downtown Shanghai and outward.

Literally small steaming basket buns. But I translate them in  my head  to pillows of happiness that will scold your tongue and  throat.  if you don’t know, what are you doing，look, there are a lot of reasons to come to China.and to Shanghai in particularly,but these babies done right,   these things alone are worth the trip. Ground pork and shrimp, folded exactly and always twenty times inside freshly made, individually rolled dough.  As they are steamed to delicious delicious fat renders with soup of the God’s  which, then, if you’re not careful causes unforgettable maxillofacial damage.

[[TEXT]]If you are a culinary enthusiast and like it, try the video below.